If there’s one thing we love about the Ancient City, it’s that you’ll never run out of things to do and places to go. From city tours, historic landmarks, delicious food and drink and, of course, an array of live music at the iconic St. Augustine Amphitheatre, there’s always something to do! The Amp is one of the best places to enjoy concerts in St. Augustine, Florida with its intimate outdoor setting and covered seats, you can enjoy a variety of performances from all genres in a laid-back atmosphere that invites you to sing your heart out. So, get your calendars out, here are all of the upcoming concerts at The Amp.

You may recognize him from his time on American Idol, or even his role on popular television show Glee, but Adam Lambert is coming to St. Augustine, Florida! Known for his dynamic vocal performances that fuse his theatrical training with modern and classic genres, this is sure to be a performance you don’t want to miss.

Alex O’Connor, also known as Rex Orange County, is a gifted singer and songwriter known for his unique brand of bedroom pop that combines jazz, hip-hop and soul genres. If you’re a fan of his music, you’re probably familiar with his song ‘Loving is Easy,’ and have been waiting for a chance to sing along. Well, the moment has finally arrived! Rex Orange County will be performing at The Amp this spring and is sure to be an unforgettable evening.

Event Details: The Backyard Stage ~ Thursday, May 5 at 7:00pm

The Texas-born singer, songwriter, guitarist and producer, Koe Wetzel, is coming down South for one of the most highly-anticipated upcoming concerts in St. Augustine, Florida. Providing a perfect blend of country and rock, guests can sing along to popular songs, including ‘Something to Talk About,’ ‘Good Die Young,’ ‘Happier Alone’ and more. Bonus points if you wear your cowboy boots!

The American Rock band Primus is making a stop at The Amp this spring as one of the upcoming concerts in St. Augustine, Florida you don’t want to miss! They will be performing Rush’s classic “A Farewell to Kings” in its entirety so be sure to grab your tickets before it’s too late!

American legend, John Fogerty is taking the stage this spring in what is sure to be an unforgettable performance. Known for his unique blend of music, combing equal parts blues, country, pop, rockabilly, R&B, swamp boogie and Southern fried rock ‘n’ roll, Fogerty is a Grammy winner and has also been inducted into both the Rock & Roll Hall of Fame and the Songwriters Hall of Fame. In addition, he is the only musician to be inducted into the Baseball Hall of Fame for his song, ‘Centerfield,’ a staple at baseball stadiums across the country. Sing along to his hit classics, including ‘Proud Mary,’ ‘Susie Q,’ ‘Fortunate Son,’ ‘Born on the Bayou,’ ‘Have You Ever Seen the Rain’ and many more at this once-in-a-lifetime event.

Everyone’s familiar with the iconic playlist known as ‘Yacht Rock,’ so what if you were able to dance along to your favorite songs live? Well, Yacht Rock Revue is here to make your dreams a reality – when they take the stage this May at The Amp. The nine-piece ensemble will bring their buoyant take on ‘70s and ‘80s soft rock to the masses on a new scale, playing classics from a variety of artists including Hall & Oates, Michael McDonald, Kenny Loggins, Toto and more. Get ready for a performance like never before!

Everyone’s favorite soul artist is back in Florida for an unforgettable evening. Leon Bridges will take the stage at one of the best upcoming concerts in St. Augustine to perform his latest album, Gold-Diggers Sound, with all-new songs, including ‘Sweeter,’ ‘Why Don’t You Touch Me,’ ‘Steam,’ ‘Motorbike’ and more. Of course, you can also expect to hear Bridges’ iconic songs such as ‘River,’ ‘Texas Sun’ and ‘Beyond.’ Get ready to sing and dance along to this soulful performance that will leave you wanting more.

American singer-songwriter, Phoebe Bridgers is coming to St. Augustine, Florida to perform her classic indie-inspired songs for all to hear! Originally a member of Sloppy Jane before embarking on a solo career, Bridgers’ debut studio album, Stranger in the Alps, was released in 2017 to critical acclaim and is well-known for her songs ‘Funeral,’ ‘Motion Sickness’ and ‘That Funny Feeling.’ Be sure to get your tickets before they’re gone!

The American trio of Dylan Minnette, Braeden Lemasters and Cole Preston is coming to The Amp for one of the best upcoming concerts in St. Augustine, Florida. Their album, Nothing Happens, quickly became one of the most-streamed debut albums by any band in 2019 and features the breakthrough platinum single ‘Are You Bored Yet’ as well as ‘Only Friend’ and ‘Worlds Apart.’ Their music is a unique blend of alternative rock meets indie and is sure to have you dancing on your feet.

The American indie rock band, Bright Eyes, is coming to St. Augustine, Florida to perform their expansive setlist of folk, electric-rock and country-inspired music. This show will also highlight their latest album, Down in the Weeds, Where the World Once Was, with songs including ‘Dance and Sing,’ ‘One and Done,’ ‘Tile-A-Whirl’ and more.

The American punk-rock all-girl band, Bikini Kill, is coming to St. Augustine, Florida for a lively performance at The Backyard Stage. Founded in the 90s under the belief that if all girls started bands the world would change, this band actively encouraged women and girls to start bands as a means of cultural resistance and amplify women’s voices. So, get ready to be sing along – and be heard – at this incredible performance!

Event Details: Tuesday, May 31 at 8:00pm ~ Live from The Backyard Stage

Is it even summer in St. Augustine if Rebelution isn’t performing at The Amp? The two-day event invites guests to come out and enjoy live reggae-inspired music founded on good vibes and good times. Sing along to popular songs, including ‘Good Vibes,’ ‘Roots Reggae Music,’ ‘Feeling Alright,’ ‘Safe and Sound’ and more. With plenty of good vibes and good music, all you need is good company to enjoy this show!

Following their critically acclaimed 2019 “Last Summer on Earth Tour,” the Canadian rock band Barenaked Ladies is ready to take the stage to play songs both old and new from their array of 17 albums. Get ready to be transported back to the ‘90s at this unforgettable event.

Are you ready for a weekend-long music event like no other? Fool’s Paradise is a destination event returning to St. Augustine, Florida after a five-year hiatus. Bring along a funk-fueled weekend with an exciting line-up and headliner, Umphrey’s McGee. Presented by Live For Live Music, Purple Hat Productions, GMP Live and Rose Tours, the highly anticipated return of Fool’s Paradise will see Umphrey’s McGee perform a total of four sets throughout the weekend as well as special appearances from Andy Frasco & The U.N., Isaiah Sharkey Band (x2), and Jennifer Hartswick & Nick Cassarino, with more artists TBA. Get ready for a groovy weekend like no other and get your tickets while you still can!

Can you imagine a better lineup than critically-acclaimed performer, Jason Isbell and Sheryl Crow? The incredible duo will be taking the stage this summer at The Amp at what is sure to be one of the best upcoming concerts in St. Augustine, Florida. Known as one of the most respected and celebrated songwriters of his generation, Isbell is known for his songs that explore the complexities of everyday human condition with thoughtful, heartfelt and sometimes brutal honesty. While Sheryl Crow is known for her classic roots rock and popular songs, including ‘All I Wanna Do,’ ‘If It Makes You Happy,’ ‘Everyday is a Winding Road’ and more. Get ready for this can’t-miss two-day performance!

Flogging Molly is an Irish-American seven-piece Celtic punk band formed in Los Angeles in 1997, serving up classic songs like ‘Drunken Lullabies,’ ‘Going Home,’ ‘Life is Good’ and more. Their performances are known to light up the space with an impressive amount of talent and liveliness that you won’t find anywhere else. Are you ready?

American singer-songwriter, Nathanial Rateliff is coming to St. Augustine, Florida to perform alongside his backing band, The Night Sweats. Described as a mixture of folk, Americana, vintage and R&B, Rateliff will be performing his latest album, The Future, with songs like ‘Something Ain’t Right,’ ‘Face Down in the Moment’ and ‘What If I,’ alongside classic hits including ‘Easy Spring Till,’ ‘You Should’ve Seen the Other Guy’ and ‘And It’s Still Alright.’

Ringo Starr and His All Starr Band

Don’t miss your chance to see iconic performer, Ringo Starr when he visits St. Augustine, Florida this summer with His All Starr Band! Performing his 20th studio record, What’s My Name, Starr’s live shows are known to be a lively performance and crowd-pleaser for all who attend.

Genre-bending band Whiskey Myers is certainly a can’t-miss when it comes to upcoming concerts in St. Augustine, Florida. Their self-produced fifth studio album, Whiskey Myers, debuted at No. 1 on both the Country and Americana/Folk sales charts, at No. 2 on the Rock chart and No. 6 on the all-genre Billboard 200 chart. Their popular songs ‘Stone,’ ‘Broken Window Serenade’ and ‘Ballad of a Southern Man,’ are sure to be even better when performed live, so don’t miss out!

Popular bands Atmosphere and Iration are hitting the road together to bring their Sunshine & Summer Nights Tour to St. Augustine, Florida this July! Known for their island-swaying, reggae-inspired sounds and range of genres, including rock, pop, R&B and funk, this iconic summer event is a can’t-miss.

If you need a place to stay after attending one of these concerts in St. Augustine, Florida, then why not head over to The Local – St. Augustine? Located on Anastasia Island, just down the road from The Amp, our comfortable beds are ready and waiting to welcome you after a long night of singing and dancing. 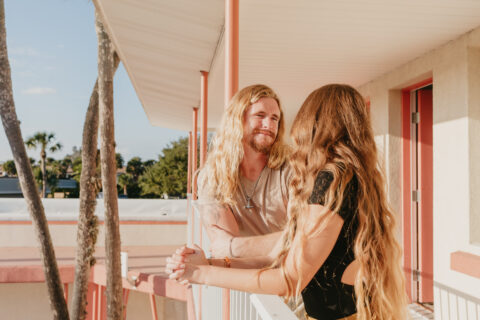